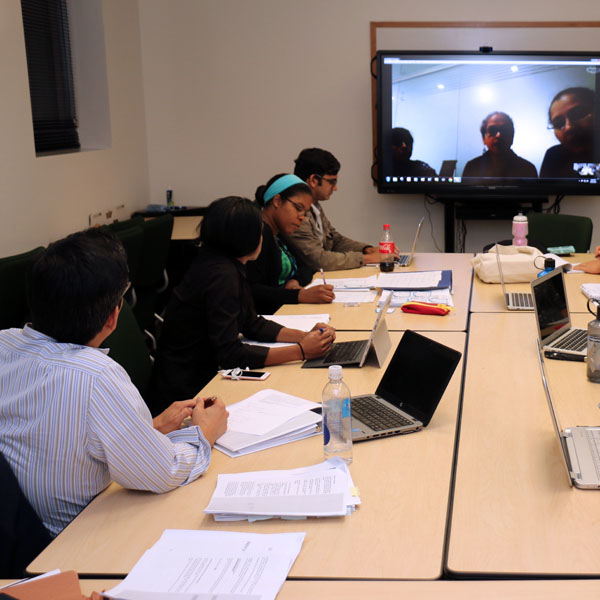 When Professor Hiro Aragaki designed the new class “Drafting a New Mediation Law for India,” he set out to redefine experiential learning in the alternative dispute-resolution field. Judging by the far-reaching impact of the class, he succeeded: His Loyola students consulted on what may become India’s first national mediation legislation.

Aragaki designed the class around a pressing need: India’s courts have a backlog of approximately 32 million cases. Litigation takes 10 to 15 years to resolve on average, according to Laila Ollapally, the founder of the legislative-drafting group. India’s lawyers, judges and academics are seeking to alleviate the backlog with a comprehensive statute outlining court-connected and private mediation systems.

To the seven Loyola students in Aragaki’s unique class, the experience took on a life of its own. “Everyone became pretty passionate about mediation law and how it should work,” said student Aletha Vassilakis ’17.

Students first studied India’s legal system and dispute resolution traditions. They then looked at the rules in countries with well-developed systems. Along the way, they heard from such guest speakers as a Los Angeles lawyer trained in India, a state legislative staffer and representatives of groups writing mediation laws in Brazil and the Republic of Georgia. After that, the students dug into the techniques and technicalities of drafting legislation and dissected the India working group’s then-current draft.

Throughout the process, each student prepared and presented a detailed comparative research memo on one recurrent mediation issue, such as how to maintain confidentiality over the process, whether to toll the litigation statute of limitations, or how to enforce mediated settlements. Aragaki sent those memos to the practitioners in India, who then discussed the ideas with the class in intense, live conferences over Skype.

Finally, each student drafted his or her own proposal for a model mediation statute.

“It was really interesting to see everyone’s ideas on how mediation should work based on their backgrounds,” said Vassilakis, who has experience as a mediator from participating in the Loyola Law School Center for Conflict Resolution.

Nicolas Pappas ’17 said the class gave the students an excellent opportunity to learn about statutory construction and interpretation. It also provided a rare cross-cultural look at the law. “It gave us chance to read the law around the world and see what those parts of the world think is important,” Pappas said.

Aragaki said he believes the group is incorporating some of the class’s ideas in its draft, such as an innovative method to enforce mediation settlements by making them part of judicial decrees. “The ideas the students had made a real difference,” he said.