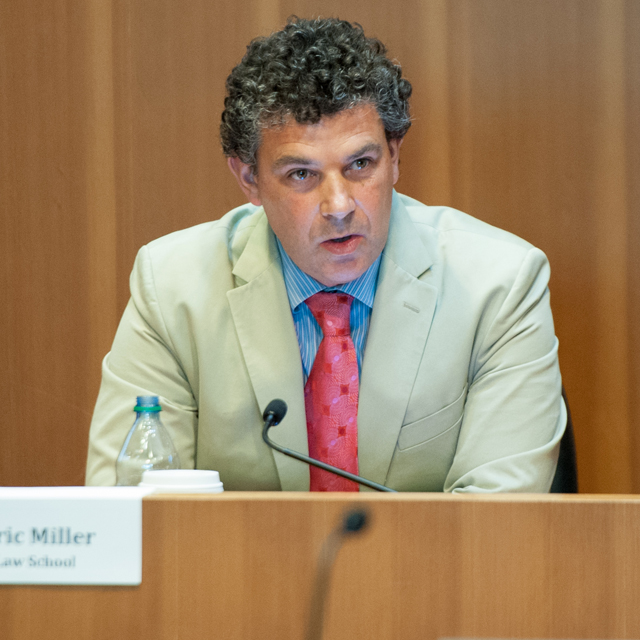 The Department of Justice recently released a report criticizing the Chicago Police Department for routinely  violating the civil rights of those it polices – particularly among members of minority groups. Loyola Law School, Los Angeles Professor Eric Miller, Leo J. O’Brien Fellow, understands that epidemic all too well. As a professor of criminal procedure with a focus on police, Miller studies the relationship between police and marginalized communities.

Miller’s recent presentation at the Association of American Law Schools Annual Meeting panel “#BlackLivesMatter: Balancing Security with Dignity in American Policing" raised points that are particularly salient in light of the Chicago report. His talk, which is the basis for his forthcoming law review article in the Fordham Urban Law Journal, sought to answer a range of policing questions:

Q: How Do We Define Police?

A: The Black Lives Matters movement has raised a series of political questions that have lain dormant for about half-a-century: indeed, since the last major period of racial unrest in the 1960s. Some of those questions are: What are the police? What is their role? To whom are they accountable? Whom do they represent? In the late 1960s and early 1970s, a variety of sociologists and administrative law theorists provided what has seemed like a definitive answer: that the police are those people entrusted with the situational power to deploy force in the community. But the Black Lives Matter movement, along with the less organized but equally compelling smartphone scrutiny of police violence, has given us good reason to be unhappy with this answer. The situational power to deploy force does not appear to represent the rule of law and the rights of civilians on the street. So the sociologist’s answer, telling us what, descriptively, the police actually do, does not tell us whether, normatively, the police ought to be doing it, and, politically, on behalf of whom they do it.

Q: To Whom Are Police Accountable?

A: The political and normative set of questions raised by the Black Lives Matters movement about which I am particularly interested are the questions of representation and agency: On whose behalf to the police act? Police legitimacy often depends upon the answers to these questions: They gain their authority to intervene, including to deploy force, because of their role as state or municipal agents. In acting as the police, they act in their role as public officials authorized by the laws of the relevant jurisdiction that confer the legal power to act as they do.

Q: How Do Politics Intervene?

A: In our current political climate, the question of whom the state represents is a live one: large chunks of people on the right of the political spectrum have claimed that President Obama does not represent them, and large chunks of people on the left of the political spectrum claim that President-Elect Trump does not represent them, either. These communities are making an important political point: To represent some group is to claim to be authorized by that group to speak and act on its behalf. The police have a pretty compelling claim to speak and act on behalf of the state: They are members of the executive branch of government, and the various constitutive rules of government identify them as state agents. But speaking on behalf of the community is a question of political rather than institutional legitimacy. And it is that question that is being pressed by the Black Lives Matter movement and requires a political answer that goes beyond the constitutive rules of the state.

Q: On Whose Behalf Do Police Act?

A: One political answer is that acting on behalf of a community—representing a community by speaking on its behalf and acting in its name—requires regarding oneself as answerable to the community. It requires regarding community members as having standing to call you to account, as a community representative, for what you are saying and what you are doing. And this idea of accountability has important consequences for the political standing of members of the public on the street, in their interactions with the police.

The police provide two answers to the question of how they are answerable to the community: the first is that they express the values and interests of a particular group, for example by soliciting public opinion and input as to how to deploy their resources. This is the answer promoted through the community policing movement: The police are not mere agents of the state, but responsive to the needs of the community.

We have good reason to be suspicious of that answer. As my colleague, Priscilla Ocen has argued, the history of policing is of denying that black people, and especially black families, share values deserving of police protection. Instead, the tenor of policing has been to remain suspicious of supposedly pathological black values. And as the Black Lives Matter movement reminds us, this normative suspicion has practical consequences, as the police live outside the community and treat the communities they police as outsiders or enemies to be quelled rather than answered to.