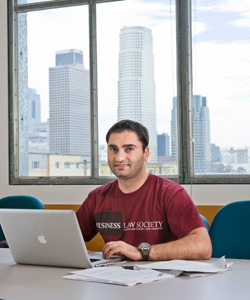 Intellectual Property is one of the most dynamic and fastest growing areas of legal practice and represents roughly 20 percent of the American economy. Technology and social media are enabling the rapid distribution of content to millions of mobile phones, laptops and tablets across the globe, with new legal questions surfacing every day. Every lawyer, from the solo practitioner to in-house counsel to transactional and litigation lawyers in large firms will increasingly be faced with IP issues. LLM graduates with an IP Specialization will be prepared for the “knowledge” economy of the 21st century.

The Loyola Entertainment Alumni Network is one of the largest alumni networks in the world specifically focused on entertainment, media, and intellectual property. Externship opportunities held by Loyola students in just the past year read like a "Who's Who" of the entertainment business, and include companies such as NBC/Universal, Sony, Lionsgate, MTV Live Nation, Warner Brothers Television, HBO, Activision and many more.

The LLM degree requires 24 total units of credit. The Intellectual Property Law Specialization will be recognized upon the satisfactory completion of 12 units of coursework. This includes 5-6 units of required courses and 6-7 units of electives.