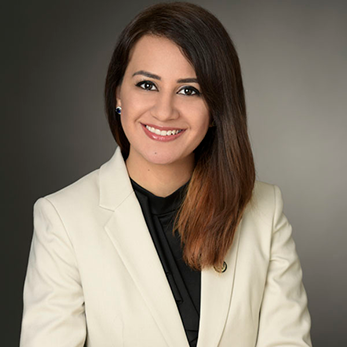 Spozhmai Salma Stanakzai has a Bachelor's of Laws (LLB) in Islamic Law (Sharia Law) from Kabul University, Afghanistan from 2006 to 2010. Soon after she was granted a merit-based scholarship by Partnership for Justice Reform in Afghanistan, an INL Funded project, to do her Master's of Laws (LLM) in the U.S. She completed her LLM degree with a specialization in the field of International and Comparative Law from Chapman University. She has benefited from trainings in fields of Diplomacy, International Law and International Relations in Australia, Italy, Netherlands, and Belgium through her work with the Ministry of Foreign Affairs of the Islamic Republic of Afghanistan.

Ms. Stanakzai has extensive experience in teaching Public and Private International Law, Diplomatic and Consular Law, and International Trade Law at different private universities in Kabul, Afghanistan. She has also served government of Afghanistan at the Ministry of Foreign Affairs where she worked as Manager of Media Monitoring and Legal Analyst for the Communication and Spokesperson’s Directorate General and Head of Diplomacy and Political Science Department of the Institute of Diplomacy. During her work at the Institute, she trained junior diplomats in fields of International Law and Negotiations and at the same time assisted Institute of Diplomacy in developing a new curriculum for the Master's degree program, designed for Afghan diplomats.

Ms. Stanakzai has been recipient of several academic distinctions and scholarships. She was honored with Manfred Warner Award by NATO (North Atlantic Treaty Organization) for her research on Islam and Democracy. Recently she got a prestigious scholarship from Open Society Foundation, New York for her JSD research. She was acknowledged for her excellent academic work as a student and represented Kabul University in Philip C. Jessup Moot Court Competition in 2010, where Afghanistan won the Jessup Spirit Award. In addition to her academic activities, she is currently working as a consultant on Afghan law for Judge David O. Carter. Ms. Stanakzai worked for Shajjan & Associates, an Afghan Law Firm based in Kabul, form 2011 to 2016 as a research consultant in the fields of International and Comparative Law. Her work with Shajjan & Associates allowed her to have an exceptional grasp of Afghan Laws.

Her research is in field of International Trade Law. With the decline in traditional barriers to trade such as tariffs, there has been heightened interest in the impact of technical measures on trade in agricultural and food products. The recognition that SPS and other technical measures can impede trade in agricultural and food products has focused attention on the SPS capacity of developing countries. There are concerns that many developing countries, and in particular the least-developed countries, lack the capability to comply with SPS requirements in their export markets, particularly industrialized countries. This undermines any competitive advantage and may prevent the benefits of trade reforms from being realized.

Afghanistan sits at the heart of South and Central Asia, at the meeting point of ancient trade routes known together as the Silk Road. Traders of old travelled with their caravans of silks and spice across the rugged Afghan terrain. Afghans have engaged and profited from trade for centuries. Trade is a key driver for economic growth. It creates jobs, raises incomes, reduces poverty, spurs investment, and increases government revenue. Trade also builds the economic foundation for true and lasting peace. The Afghan economy has always been agricultural, despite the fact that only 12% of its total land is arable and about 6% is currently cultivated. Now its important to see that after becoming a member of the WTO how the new SPS measures that will be imposed on Afghanistan by WTO will affect Afghanistan’s food and agricultural products in national, regional, and international markets.

Her dissertation on SPS measures in Afghanistan will provide an in depth explanation on the key provisions of the Agreement including risk assessment, harmonization, transparency, equivalence, and regionalization and examine the technical capacity required for SPS notification and Information Management Systems and will also look into the experience of the neighboring countries in this area.