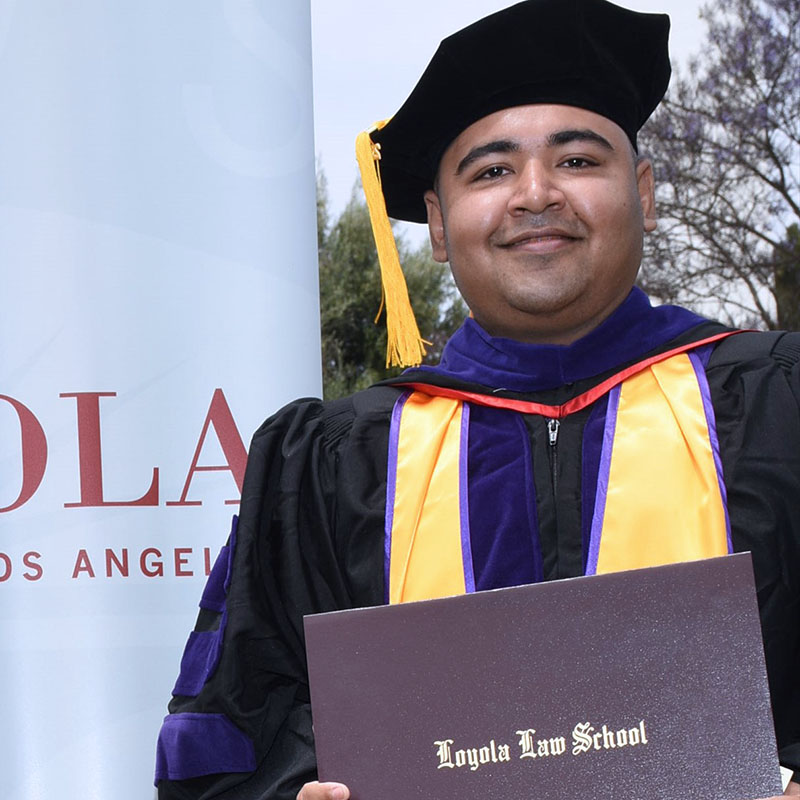 Friends and law school colleagues from India often ask Harsh Dave ‘18 whether he would recommend that they get an international LLM degree from Loyola Law School, Los Angeles, just as he has done. The 2018 Loyola graduate always tells them emphatically: Yes!

“If you want to do something apart from being an ordinary lawyer in India, this is your best option,” Dave tells them. A year studying at Loyola in Los Angeles exposes an international student to many more opportunities and contacts within the local legal community than they could find anywhere else, he says.

Dave chose Loyola because of its excellent reputation and strong network of prominent alumni. “If you study at Loyola for a year, you’ll get to know many other students and alumni who can help you out in many different ways,” he says.

Another important reason he chose Loyola was its location near the international finance and legal epicenter of the downtown Los Angeles business district. Also a draw are the nearby Silicon Beach tech hub, much like California’s Silicon Valley to the north, and Hollywood.

“The market is very big in California for tech as well as for entertainment,” Dave says. “Any startup that launches in California could go worldwide and need international lawyers. International business is a huge portion of those industries.”

Dave grew up in Ahmedabad, the largest city in the Indian state of Gujarat. He earned combined bachelor’s and law degrees there from Nirma University and its Institute of Law. He wanted to take his career to the next level, and he determined that Loyola was the right place to do it.

“I was so happy with Loyola’s support and the feeling of finding a home on campus,” he explains. “Professors and staff make international students feel welcome rather than insecure.”

Dave chose to keep his coursework generalized, focusing on subjects tested on the California Bar Exam, which he took in July 2018. For students like Dave, Loyola offers the unique Bar Track LLM to help them prepare for the California and New York bar exams.

Other Loyola Law School students also helped. Unlike several other LLM programs in the L.A. area, Loyola puts its international students in classes alongside regular JD students, an approach Harsh calls invaluable for networking and acclimating to the new environment.

As he waits for his bar exam results, Dave is working for an Indian-American lawyer who practices in the large Indian community in the L.A. suburb of Cerritos. He says he is looking forward to finding a post with a law firm and someday opening his own practice handling international business matters.

“Having an LLM degree from a prestigious university like Loyola Law School provides an unparalleled opportunity to work on international law,” he says.